The blue border around this card matches the team pretty nicely: 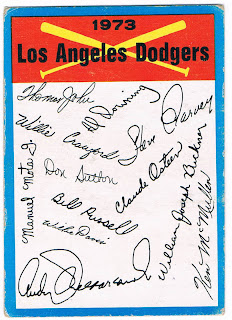 (No Number) -- Los Angeles Dodgers Team Checklist Card
The Dodgers were building a team that would go to the World Series three times before the decade was over, but still needed a couple of key players in place.

This is the eighth team whose unnumbered checklist card has been featured on this blog, and so far, only two teams have presented a full team among the signatures. This one has three outfielders: Mota, Davis and Crawford. However, the rest of the players are short. There is no catcher, no second baseman and two third basemen (Garvey and McMullen). Buckner is taking first while Russell mans the shortstop position. Finally, there are five pitchers, including Andy Messersmith, whose signature almost looks like John Hancock's in the way it takes up so much space.

The count remains at two "complete" teams in the set so far.
Posted by Chris Stufflestreet at 8:30 AM