Chris Speier scores, and a bunch of players are on hand to witness it: 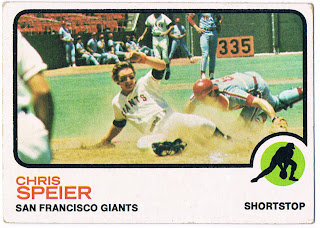 Card #273 -- Chris Speier, San Francisco Giants
Among the Giants, the batter in the on-deck circle is watching the play, while third base coach (John McNamara?) looks on. The entire Phillies bullpen is in the shot, as well as Don Money at third. The catcher is either Tim McCarver or John Bateman, since both would wear uniform number 6 for the 1972 Phillies as they were traded for each other. I'm guessing it's McCarver. In the middle of the action, there's a sliding Chris Speier.

Chris Speier enjoyed a long career, playing 19 seasons from 1971-'89. He bookended his big league career with two stints in San Francisco. Most of the rest of his career was spent in Montreal. He was a solid player, even if he didn't live up to his initial potential. He would be named to the All-Star team three straight years (1972-'74) and played in three National League Championship Series. Interestingly, the Giants made the Series in 1989 but Speier sat out that postseason.

After retiring, he became a minor league roving instructor and a hitting coach. Today, he is the bench coach for the Cincinnati Reds.
Posted by Chris Stufflestreet at 8:30 AM