In previous posts, I've mentioned how the horizontal format Topps used on some of its 1973 baseball cards has been both good and bad. And then there's stuff like this card: 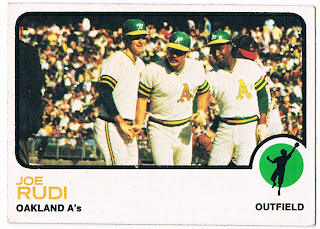 There's a lot of stuff going on in this picture. It appears Gene Tenace has just scored, perhaps after hitting a long shot. He's flanked by two of his teammates giving congratulations, while the opposing team's catcher looks toward the mound. To the left, an umpire stands by waiting to resume game play. Out of the five people shown in the photo before the seemingly sold-out crowd, none of them is actually Joe Rudi.

Tenace only hit five homers in '72...so if it actually was a deep shot it's pretty easy to determine which game the picture was taken, thanks to Baseball-reference.com. On June 25, 1972 the A's and Angels played a doubleheader at the Oakland Coloseum. In the second game, Tenace hit a home run during the second inning with Bill Voss and Sal Bando aboard. The three-run shot was the first score of the contest and would be all the A's needed as they ended up winning 6-0. Since the A's in the photo are wearing their home uniforms, the catcher appears to have a red bill on his cap (like the Angels), this may be the game. Voss is the guy to the left of Tenace and Marty Martinez -- who batted behind Tenace in the lineup that day -- is holding a bat. The catcher is Art Kusnyer and the ump would be Larry Barnett. None of the other players shown on the card besides Tenace would have his own 1973 Topps card.

Anyhow...back to the guy who was supposed to be on this card...

Not recognizing Rudi when it came time to pick the photo for his card is hard to understand. After all, he'd just come off a great season in 1972, helping lead his team to a World Championship and being second place to Dick Allen for that year's MVP award. He would remain with the A's through its dynasty but was involved in a bizarre deal in 1976. His contract was sold to the Boston Red Sox (along with that of teammate Rollie Fingers) but Commissioner Bowie Kuhn would veto the deal and return the players to the A's. Rudi would finally play for the Red Sox in 1981, after four seasons with the Angels and before returning to Oakland for a final season in '82.
Posted by Chris Stufflestreet at 8:30 AM