While Topps' decision to use more game-action shots was a great way to breathe some life into cards that had often become stale with closeup pictures (often without baseball caps) or generic poses that were obviously done so the photographer could get his shot quickly and let the player go back to his own job.

But sometimes you had to wonder what certain players did to deserve some of the shots that ended up on their cards in 1973. Take a look at this card of Dick Green: 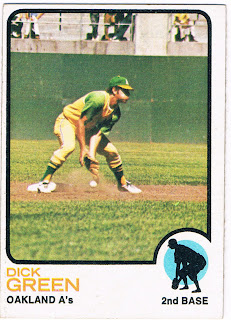 Card #456 - Dick Green, Oakland A's
Is this the best picture Topps could find of Green to put on his baseball card? A blown play at second base? Really? It almost makes you wonder whether Green hit on the photographer's wife or tried to trip him as he was walking around the field.

In all seriousness, Green was known as a skilled fielder. His glove likely kept him on the team for a few years as his hitting declined. Despite an injury that kept him off the field for half of the '72 season, he returned as the regular A's second baseman for two more years before retiring. Those last seasons would earn him all three of his World Series rings and Green played every single game during all of those postseasons. That's going out with a bang.
Posted by Chris Stufflestreet at 10:31 AM