The two players pictured on this card also appeared on the Home Run Leaders card. 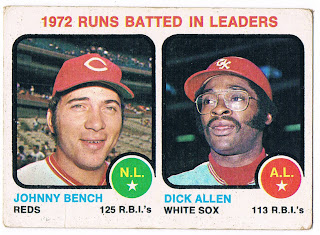 Card #63 -- 1972 Runs Batted In Leaders
Bench narrowly beat out the Cubs' Billy Williams (who drove in 122 runs) for the title. Dick Allen, on the other hand, finished well ahead of John Mayberry, who knocked in 100 runs. If both leagues had been combined, Allen would have been the only American League player among the Top 5.

At the moment when the American League was about to introduce the Designated Hitter position to help spur more offense, it appeared they needed it.
Posted by Chris Stufflestreet at 8:30 AM