Something really isn't right about this card: 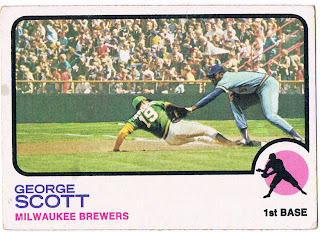 Card #263 -- George Scott, Milwaukee Brewers
This has been mentioned in a number of blogs already, but I'll bring it up again. The players look superimposed against a background shot. The colors don't match, the stands don't look like they're angled correctly on the field and the fans don't appear to be looking at the action on the card. Bert Campaneris is sliding back to first on a pickoff attempt, while the crowd is looking toward third?

It's a case of having everything else on the card distract from the action shot.

1972 was George Scott's first year with Milwaukee after six seasons with the Red Sox. He was a fine first baseman, collecting eight Gold Gloves during his 14-season career. While with the Brewers, he manged to lead the league in RBIs and tie for the Home Run mark with Reggie Jackson in 1975. He also began wearing a necklace -- shown on later cards -- that he often said was made out of the teeth of second basemen. Later in his career, he wore a batting helmet in the field after having objects thrown at him during a road game.

George Scott was one of a kind. Today, by the way, is his 67th birthday.
Posted by Chris Stufflestreet at 8:30 AM