Teammate to the Stars

Today's card features a former player I was privileged to speak with in a conference-call interview a few years ago: 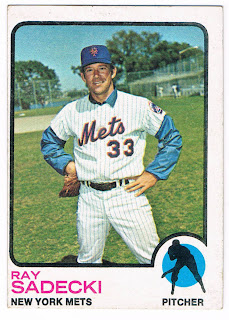 I don't know about the striking out part (he did it 161 times in his career over 872 plate appearances, even though some years only had single-digit totals), but Sadecki was an above-average hitter for a pitcher. During the conversation, he mentioned the difference between  the National League and the American League (where he'd eventually go in 1676, after the DH had been implemented). By that time, hitters weren't even expected to take their turns in the batting cage, which was different from the way things were in the other league.

As for the teammates part, I went and did a quick, unscientific check over his 18-season career:

I may have missed one or two, but that's a lot. Joe Torre (who was with the Mets in '77) will likely be added to that list eventually. One person I didn't add was Orlando Cepeda; he was with the Giants in '66 but was traded to St. Louis for Sadecki so they were never teammates. He was also involved in a trade that brought Torre to the Mets. Being traded straight-up for a future Hall of Famer gives an indication of how valuable Sadecki was.

Shortly after being traded to San Francisco, Sadecki was involved in an unusual game. On July 3, 1966, he and Tony Cloninger each hit home runs off each other. It probably isn't the only time it's ever happened, but there can't be a lot of games that see two pitchers hitting homer off each other. Actually, Cloninger would hit two in that game, but the first was off starter Joe Gibbon. The Giants lost that game 17-3, but by the time Sadecki got in, it was already 12-2 in the 4th.

Sadecki played in two World Series during his career, and both were on teams that won their pennants unexpectedly: the 1964 Cardinals and the "You Gotta Believe" '73 Mets. During the conversation I sat in on, he explained that both were surprises to the teams as well. The Phillies were so far ahead in '64 before their collapse, while the '73 Mets had been so far behind for much of the season before their surge.

Looking at this card, I don't see a guy posing for a photographer at a Spring Training facility. Instead, I see a guy that I was able to talk with over a two-hour phone conversation with some other friends, a guy who rubbed shoulders with Stan Musial and pitched to Mickey Mantle in a World Series. Someone who elaborated for a little while on my assertion that catchers are often the smartest players on the field. The personal interaction is one of the things that makes this card special.
Posted by Chris Stufflestreet at 8:30 AM