There are two players who were born on December 2 that appear in the 1973 Topps set. One was Pedro Borbon, who was featured earlier. The other is this guy, who's painted into his new uniform (including a way-too-big hat logo and city name on his shirt) after being traded away from the Reds after the end of the 1972 season: 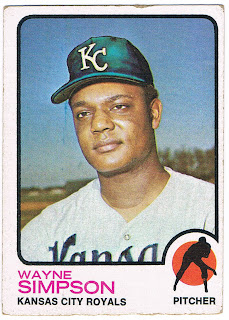 Card #428 -- Wayne Simpson, Kansas City Royals
Wayne Simpson turns 63 today. And why am I focusing on today's birthday boys? Well, if you're familiar with the Beatles song I quoted in the title of this post, the next line in the lyric applies to me.

This picture is airbrushed, due to Simpson having been a member of the Cincinnati Reds until 1972. The hat logo is too large, as is the "Kansas City" emblem on his shirt (not to mention that a white shirt would have said "Royals" on it).

Simpson made his major league debut in 1970, pitching a compete two-hit shutout against the Dodgers. He was a key member of a rotation that won the pennant and was an All-Star. However, he tore his rotator cuff late in the season and missed the postseaon. He was able to come back from his injury but wasn't the same pitcher afterwards. He spent both '71 and '72 shuttling between Riverfront Stadium and the AAA affiliate in Indianapolis before he was traded to Kansas City in the Hal McRae deal.

Simpson continued to split time between the majors and minors in '73 and spent all of '74 in the minors. He would return to the majors in 7 games with the Phillies in 1975 and one last season in California in 1977 before being sent down for good and then finishing up in Mexico in 1979.

The 1970 Reds staff had three promising young pitchers: Simpson, Don Gullett and Joe Gary Nolan (See the comments for the correction -- Ed.). Interestingly, all three developed arm problems and were out of the game by the end of the decade.
Posted by Chris Stufflestreet at 8:30 AM