This A. Rodriguez also played third base for the New York Yankees, but nobody ever thought to call him "A-Rod." The practice of shortening a player's name seems to be a modern phenomenon: 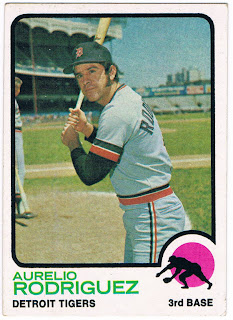 Aurelio Rodriguez was well-renowned for having one of the strongest throwing arms of any third baseman in the game. No less of a third baseman than George Brett praised him, saying that he would toy around and pound the ball in his glove...and still throw a batter out by 10 feet. He only won a single Gold Glove at his position, but the one he picked up in 1976 broke Brooks Robinson's streak of 15.

Baseball card collectors know him as the player whose picture on his 1969 Topps card was actually a batboy for the Angels. California was the first of seven major league teams Rodriguez played for over the course of a 17-year career, but he spent more time with the Tigers than any other.

And it was in Detroit that he met his doom. While visiting the city in 2000, he was a pedestrian that was in the wrong place when a freak car accident occurred. There have been three men named Aurelio to have played in the major leagues (the others were Aurelio Lopez and Aurelio Monteagudo), and all three were killed in car accidents at a relatively young age.

A member of the Mexican baseball Hall of Fame, his funeral was attended by thousands. Among the mourners was the country's president.
Posted by Chris Stufflestreet at 8:30 AM