In 1962, this player was selected to Topps' All-Star Rookie team as the second baseman, despite the fact that fellow second sacker Ken Hubbs actually won the Rookie of the Year award in the National League: 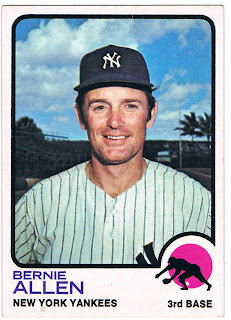 This Spring Training shot was the image on Bernie Allen's final card. Although he started 1973 with the Yankees, his contract was purchased by the Montreal Expos during the summer. He would finish his career there at the end of the year.

Allen signed with the Minnesota Twins after playing at Purdue University, where he also played quarterback on the football team. He replaced Billy Martin as the Twins' second baseman in 1962 and had an outstanding rookie season (as evidenced by his inclusion in the All-Star Rookie team). However, he would get sent back down to the minors for part of 1965. In 1967, he was traded to the Washington Senators. When that team moved to Texas in 1972, he was traded to the Yankees.

At New York, he was used as a pinch-hitter and picked up the slack for regular second baseman Horace Clarke and third baseman Graig Nettles. The card above shows him as a third baseman, but he split his time between second and third during his stay in The Bronx.
Posted by Chris Stufflestreet at 8:30 AM