This pitcher tossed the first no-hitter on artificial grass, as well as the first inside a domed stadium: 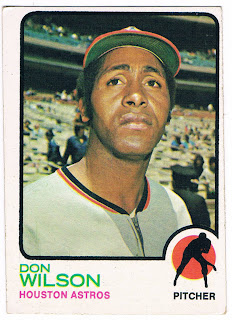 Card #217 -- Don Wilson, Houston Astros
Don Wilson pitched two no-hitters during his career, one in 1967 and the other in '69. 20 of his 104 wins was a shutout, including the last game he pitched. He was a pitcher who could rack up strikeouts (averaging 6.6 per 9 innings) while not allowing a whole lot of hits and walks. He even managed to lay down a bunt double against the Phillies in 1971, which is a rare feat.

However, Don Wilson's death will probably overshadow what he did in his life. On January 5, 1975, he was found dead in his garage. His car was running and the garage was closed, so he died of carbon monoxide poisoning. His son was also in the car with him. A daughter and his wife were inside the house and had to be hospitalized. The death was ruled an accident, but that hasn't stopped fans from suggesting something else was afoot.

Ironically, the picture on this card seems to suggest an inner sadness, something that may not have been noticed until the sad news broke.
Posted by Chris Stufflestreet at 8:30 AM