The title above this post isn't meant to say this player was a comedian; instead, it was his most effective pitch: 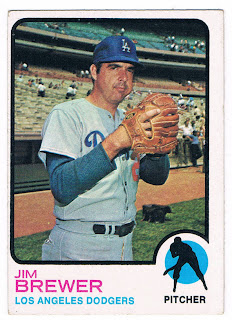 Card #126 -- Jim Brewer, Los Angeles Dodgers
Jim Brewer took advice from Warren Spahn, who encouraged him to develop the screwball as a unique pitch. He definitely made the most of it, gaining a repuration as one of the toughest pitchers in baseball against right-handed hitters. In fact, opposing managers would send up left-handed pinch-hitters (unusual for southpaw pitchers) because he was so rough on righties.

Brewer came up with the Cubs in 1960 and was traded to the Dodgers before the 1964 season. In a dozen seasons in Los Angeles, he settled into a role as one of the team's top relief specialists. He appeared in more games than any other Dodger pitcher except Don Sutton and Don Drysdale, saved 125 games for the club and appeared in three World Series. He would be traded to the Angels in 1975 and retired after the '76 season.

As a rookie with the Cubs, Brewer was involved in a nasty on-field incident involving Billy Martin, who was then playing for the Reds. After brushing back Martin with a pitch, Billy threw his bat toward the mound. Brewer picked up the bat and handed it to the approaching Martin, who simply cold-cocked him instead to taking the bat. The punch broke the cheekbone under Brewer's right eye and put him in the hospital for two months.

Jim Brewer passed away in 1987, after sustaining injuries in a car crash.
Posted by Chris Stufflestreet at 8:30 AM