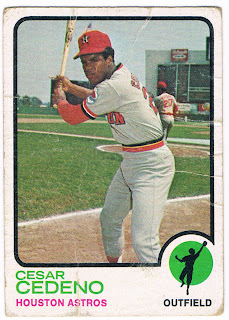 Card #290 -- Cesar Cedeno, Houston Astros
Cesar Cedeno was a player who possessed power, speed and defensive abilities that made a player like Willie Mays a star, as well as an eye for walks and a strong outfield arm. He was a four-time All-Star during the 1970s and won the Gold Glove at his position every year from 1972 through '76. In the pre-Rickey Henderson era, he stole more than 50 bases for six consecutive seasons. In fact, he was the second player after Lou Brock to hit 50 20 homers and steal 50 bases in a season (doing that for three straight years). In short, he was a solid player who racked up some impressive stats that made him dangerous to his opponents.

However, for much of his career he played half his games in the Astrodome, a notorious place that ate up stats like that. It would have been interesting to see him play for a more powerhouse club like (Pittsburgh or Cincinnati) during the era and see how far they might have gotten. As it turned out, Cedeno did end up on the Reds, but they were no longer the Big Red Machine by the time he arrived in 1982. Late in his career, he was traded to the Cardinals in 1985 and provided a large spark that helped propel them past the Mets that year and into the World Series.

After finishing his career in Los Angeles in 1986, he became a coach in the Winter Leagues in Venezuela and his native Dominican Republic.
Posted by Chris Stufflestreet at 8:30 AM