It's ironic that Topps chose a picture of this guy taking his turn at batting practice: 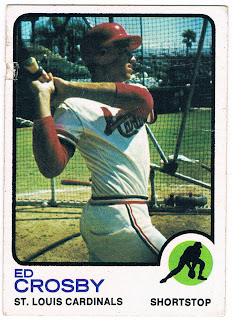 Card #599 - Ed Crosby, St. Louis Cardinals
Ed Crosby was a prototypical good field/no hit infielder, amassing a .220 career batting average and failing to hit a single home run in his six seasons. After coming up to the Cardinals in 1970, he would split 1973 between St. Louis and Cincinnati before spending parts of three seasons in Cleveland. He remained in the minor leages until 1979 but wasn't able to get back to the majors after 1976.

Despite his anemic stats and short career, Crosby had a son who would win the Rookie of the Year Award in 2004. In fact, Bobby Crosby enjoyed a longer major league career than his father did. Another son, Blake, is in the Oakland A's organization.
Posted by Chris Stufflestreet at 8:30 AM