The "Other" Bernie Williams

All this week, I've been featuring players whose names are close to more recent (unrelated) members of the New York Yankees. Today, here's a guy whose name matches exactly: 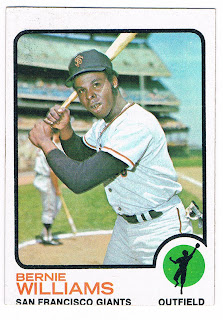 Bernie Williams spent parts of three seasons in San Francisco, but actually spent all of 1973 with the Giants' AAA affiliate in Phoenix. He would return in 1974 for 14 games with the Padres but was demoted back to the AA level by the end of that season.

In 1975, Williams went to Japan to play for the Hankyu Braves. He became a star there, playing through 1980 and contributing to a monumental team in 1978.

During his short time with San Diego, he shared the outfield with rookie Dave Winfield. Winfield just missed playing alongside the other Bernie Willaims, who made his major league debut the year after Winfield left the Yankees.
Posted by Chris Stufflestreet at 8:30 AM