At 80 years old, this guy is still active in major league baseball: 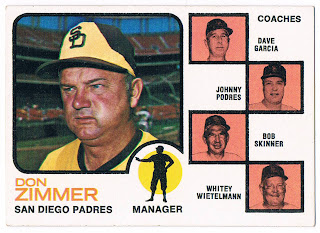 Card #12 -- Don Zimmer and Coaches, San Diego Padres
Don Zimmer began his baseball career in 1949 and was a member  of the 1955 Brooklyn Dodgers. He was also a member of another legendary team (but for totally different reasons), the 1962 New York Mets. After retiring as a player, he immediately became a coach in the minor leagues. By 1971 he was coaching in Montreal and moved over to San Diego as the third-base coach in 1972. 11 games into the season, the Padres fired Preston Gomez and gave Zimmer his first big-league skipper job. He remained a manager, with the Red Sox, the Rangers and the Cubs and was a visible member of the New York Yankees' coaching staff between 1996 and 2003. Today, he works for the Tampa Bay Rays.

Red Sox fans aren't likely to rate him high on their list of favorite people. Not considering he was the skipper of the fateful '78 team, and not after he rushed the mound to confront Pedro Martinez in 2003. A pepperpot as a player, he definitely showed his emotion on the field. But I've been told by those who know him that he's about as down-to-earth in person as you'll ever expect anybody to be.

Zimmer was one of the managers whose card contained a variation in the 1973 Topps set.  The card above shows solid-colored background behind the coaches' heads, while the one below still has the natural backgrounds (tinted, but still natural): 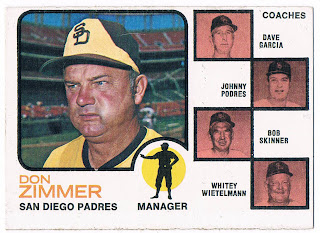 Dave Garcia never made the major leagues as a player. He later went on to manage the Angels from 1977-'78 and the Indians from 1979-'82. He continued to coach and scout into his 80s and is still around to tell his stories.

Johnny Podres was a hero of the 1955 World Series and a teammate during Zimmer's two tours with the Dodgers. After finishing his career as one of the original Padres in 1969, he remained with the team as a pitching coach and would hold that capacity through 1996 with various teams. Sadly, Podres passed away in 2008.

Bob Skinner was a member of two other teams that beat the Yankees in the World Series (the 1960 Pirates and 1964 Cardinals). He had already served as manager of the Phillies in 1968-'69 and remained a coach into the 1980s. His son Joel followed in his shoes as a player and coach.

Finally, William "Whitey" Wietelmann was an infielder with the Boston Braves from 1939-'46 and the Pirates in 1947.  He was a long-time coach when the San Diego Padres was still the name of the PCL team and coached for 13 seasons in the majors. He passed away in 2002.
Posted by Chris Stufflestreet at 8:30 AM