A New Home on the Range

For the first time in franchise history,this team recently went to the World Series: 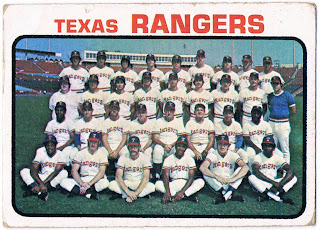 Card #7 -- Texas Rangers Team card
Since the picture had been taken in 1972, this would be the first team photo of the Texas Rangers, who had played as the Washington Senators in '71. Ted Williams is sitting in the center of the first row of bleachers, in what would be the final year he managed. That first Rangers team went 54-100, so Williams would be fired at the end of the season.

'73 wasn't much better. With another Hall of Famer (Whitey Herzog) taking over the manager's spot, the team continued performing poorly. On Spetember 7, the team was sitting on a 47-91 record and Herzog got the axe as well. With Billy Martin taking over, the Rangers finished 1973 with the worst record in baseball for the second straight year.

I wonder...how many teams have ever fired TWO Hall of Famers as manager within a one-year period? Granted, Williams didn't make the Hall of Fame for his managerial duties and Herzog was just getting started, but the question still needs to be asked.
Posted by Chris Stufflestreet at 8:30 AM