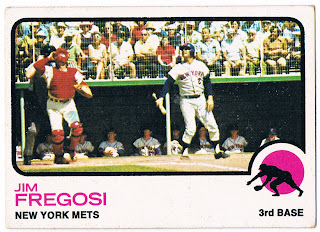 Card #525 -- Jim Fregosi, New York Mets
Jim Fregosi has popped a high foul here, and everybody is watching it: Fregosi, Johnny Bench, the umpire, the Mets in the dugout and the fans in Riverfront Stadium. In fact, about the only person not looking up is the guy in the silhouette.

1972 was supposed to be a good year for Jim Fregosi and the Mets. They thought enough of him to trade away their young fireballer Nolan Ryan to the Angels to get him. However, stubborn injuries limited his playing time and he would be playing in Texas before the 1973 season was over. Ryan, in the meantime, was setting an all-time strikeout record that year. Today, that Ryan/Fregosi trade is looked at as one of the Mets' biggest mistakes. (That said, nobody seems to remember that Ryan had a losing record in '71 or that he was increasingly unhappy in New York.)

Fregosi had been a star player in California during the 1960s. So, after playing out his career in Texas and Pittsburgh, he would become the manager of the Angels in 1978. Ironically, he would manage the same person the Mets traded to get him -- Ryan -- for his first two years. In 1979, he guided the Angels to the ALCS but lost to the Orioles. He would later manage the White Sox, Phillies and Blue Jays, winning the '93 pennant in Philadelphia.
Posted by Chris Stufflestreet at 8:30 AM