This guy was a high school teammate of Tim McCarver in Memphis,Tennessee: 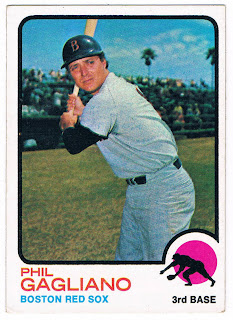 Card #69 -- Phil Gagliano, Boston Red Sox
McCarver would join him again in St. Louis, where the two would be part of two World Series champs during the 1960s. Phil Gagliano's tenure with the Cardinals would run from 1963-'70. He would be traded to the Cubs for the second half of that season, and then traded again to the Red Sox after the season was over. By the time this card was issued, he was on the move again. He spent the 1973 and '74 seasons in Cincinnati.

Largely a utility player and pinch hitter, he's listed on the card as a third baseman despite playing at second more often...but since none of the cards in 1973 split the position due to the set design, Topps were forced to put him somewhere. He also played in the outfield and at first during his career, and two games at shortstop. In short, Gagliano played wherever his team needed him.
Posted by Chris Stufflestreet at 8:30 AM