This is definitely an airbrushed photo: 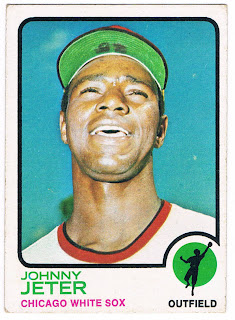 Johnny Jeter was traded to the White Sox after two years in San Diego. He had come up with the Pittsburgh Pirates in 1969 and had been sent to the minors for 1971 before being traded to the Padres. His tour with the White Sox lasted one year, before spending '74 with the Cleveland organization. After six games in the majors that year, his career was over.

His highlight was probably the game in 1972 where he slammed two of this 18 career home runs. However, since he played for San Diego that year, the Padres found a way to lose the game anyway.

In 1992, Jeter's son Shawn played 13 games with the Toronto Blue Jays.
Posted by Chris Stufflestreet at 8:30 AM