The eternal fourteen-year old inside my head really wants to make an inappropriate wisecrack about the picture on this card: 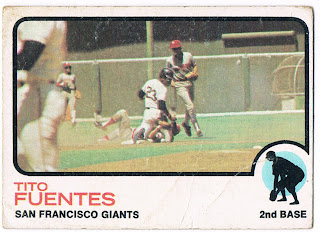 Card #236 -- Tito Fuentes, San Francisco Giants
The photo shows the aftermath of a play at second in Candlestick Park, where the Astro second baseman has just eaten dirt, the shortstop is running to back the play up and an outfielder stands at the ready. There appears to be a batter in the foreground, which means this was most likely a stolen base attempt. There really is no way to tell whether Tito Fuentes is safe or out, but looking at Fuentes's performance in 1972, he stole twice at home against the Astros, once on April 22nd and again on August 5th. It also showed that he wasn't caught stealing at all against the Astros that season, so he appears to have made it.

Tito Fuentes was an unabashed hot hog whose quotes were good for writers and whose headbands worn outside his cap made for great baseball card pictures. He was signed in 1962, one of the last players taken from Cuba before a trade embargo was put in place by the United States. He came up for the first time in 1965 and remained with the Giants through 1974. After a couple of years in San Diego and a one-year stint in Detroit, he came up for 13 games in 1978 in Oakland before retiring.

In 1973, Fuentes set a record for the best season in history for fielding percentage at second base. He only made six errors in 160 games on his way to a .993 average. Interestingly, he was among the National League leaders in errors committed during 1971 and '72. Late in his career, he hit over .300 for the only time in his career during his one season in Detroit. Despite having a career season, the team had Lou Whitaker ready to play and let him go.

In 1981, he stepped into the broadcast booth when the Giants began their Spanish-language radio programming. He remains with the broadcast team today as an analyst and is just as popular today as when he was covering second in Candlestick.
Posted by Chris Stufflestreet at 8:30 AM