It's okay if you look at this player and say, "Who?" You definitely won't be alone: 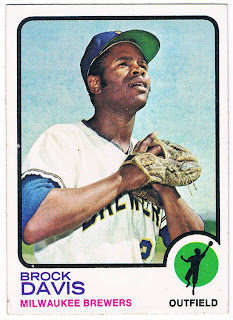 Card #366 -- Brock Davis, Milwaukee Brewers
Brock Davis was a member of the Houston Colt .45s in 1963. He didn't see much action with the team in short stints with that club that year, in '64 or '66 (when they had become the Astros). He saw a few at-bats with the Cubs in 1970 and finally saw some real major league action in 1971. He was traded to the Brewers before the '72 season and stayed with the parent club the entire season for the only time in his career. However, he was mainly a utility player that year and was back in the minors for good until 1975. So, this card showed up after his final major league game.

He only managed to hit a single home run in his major league career, which was in that first tryout in Houston back in 1963.

Davis appeared on four Topps cards. His first was in 1963 (he shared a Rookie Stars cards with Willie Stargell), followed by a semi-hi number in 1971 (another Rookie Stars card). He finally got a card to himself in 1972, and this '73 would be his final card.
Posted by Chris Stufflestreet at 8:30 AM