Playing the Field Since 1876

(My sincere apologies to the Wrigley Faithful.)

The National League began play in 1876 with eight teams. Over the years, the original teams moved around or went insolvent. Less than 100 years later, this was the only one of those teams still playing in its original city: 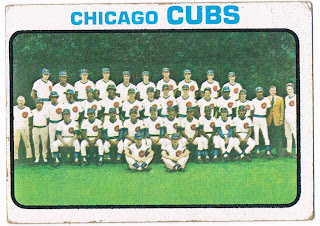 Card #464 -- Chicago Cubs Team Card
Their beginnings actually predated the National League. Just as that league was built from the ashes of the collapse of the National Association in 1875,  Chicago's franchise was founded by William Hulbert in 1871. They were on track to win the 1871 pennant when the Great Chicago Fire destroyed the ballpark, incinerated all the team's possessions and kept them from playing again until 1874. So, the team was literally raised from the ashes itself.

In 1876, they were called the Chicago White Stockings. They won the very first pennant that year and were a dynasty in the early years of the game. They went through another dynasty era at the beginning of the 20th Century. However, after their 1908 team won the World Series...well, let's just say time has been frequently cruel to those who have rooted for the team since.

While many of those years have been marked by bad teams, there have been a few times where the team got close enough to win a title for their fans, only to lose in ways that have tested the tremendous size of those fans' hearts and stomachs. In 1969, they were a team of destiny...until another team decided to take that title for themselves. In 1984, a new generation of bleacher bums suffered through a tremendous season that ended in heartbreak (for them; fans of the Padres have much better memories). Then there was 2003.

As of right now, the Cubs still haven't even made it to the World Series since the end of World War Two. Their fans deserve to see them get there, however. While other fans of long-time drought teams like the White Sox and Red Sox celebrated their championship seasons, it went little noticed that the Cubs had been waiting even longer.

This team photo features the 1972 team. They finished with their best record since 1969; however, this time they weren't in the heat of the race, finishing in second but 11 games behind Pittsburgh. They began the season with Leo Durocher as manager but fired him midseason. The team began to systematically dismantle the veterans from the '69 season and the '73 Cubs finished below .500, setting the standard for the club for the rest of the decade and into the next. The Cubs didn't have another winning season until 1984.
Posted by Chris Stufflestreet at 8:30 AM