It May Still Be Winter, But it's "May" in Our Hearts

Dressed up in his black warm-up jacket, Milt May looks like he's just a little intense here: 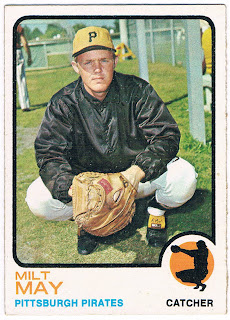 Card #529 -- Milt May, Pittsburgh Pirates
Or maybe he's just annoyed that the darned photographer is keeping him from taking pitches during Spring Training. What is noticeable, though, it May's name written onto the tongue of his shoe. It begs the question about whether some wiseguy ever asked him what he did with the cleats when June rolled around.

At the time, Milt May had been the backup catcher to Manny Sanguillen since entering the league in 1970. Sadly, tragedy struck the Pirates after the '72 season when Roberto Clemente died in a plane crash. As a result, Sanguillen was named to replace his old friend in right field and May was slated to become the regular catcher. Unfortunately, Sanguillen couldn't adapt as well to his new position and went back behind the plate. May was placed back in his backup role and would be traded to Houston after the '73 season. Since the Astros needed a starting catcher, May settled right in to the role. He only spent two years there, but was placed into the record books during his time there. While many know Bob Watson was credited with scoring the millionth run in baseball history, it was Milt May who drove him in by knocking a three-run homer.

In 1976, May was traded to Detroit, where he would play through 1979. Further stints with the White Sox, Giants and Pirates (again) would follow before May retired in 1984. He later became a coach, hitting instructor and scout for several major league clubs.

May's father was former major league player Merrill May, who was one of three players nicknamed "Pinky" in the 1941 Play Ball set. That set's use of nicknames as part of the card was neat, but "Pinky" doesn't seem to be a manly name for an athlete, let alone three of them in a 72-card set.
Posted by Chris Stufflestreet at 8:30 AM