If You Can't Say Anything Nice...

There's the old saying that if you can't say something nice about somebody, it's better to simply say nothing at all. So, when researching this guy: 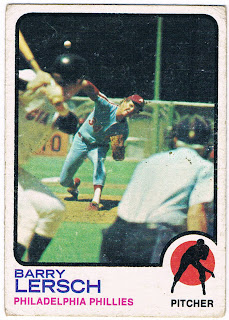 Card # 559 -- Barry Lersch, Philadelphia Phillies
Wikipedia has two paragraphs on Barry Lersch. The longer one explains a game he pitched in the minors. Baseball-Reference shows that he was among the league leaders in 1971...in losses, home runs allowed and walks per 9 innings. Yikes. 1973 was his last year with the Phillies...in '74, he would pitch one game for the Cardinals. After 1 and a third innings, three hits, five walks, six runs allowed and a 40.50 ERA, his baseball career was over.

I'm reminded of what Topps legend Sy Berger had to say about writing biographies of some players: "What am I supposed to say...This guy stinks?"

Fortunately, the picture gives me a little bit to run with. Taken at Candlestick Park, it shows Lersch delivering a shot to a Giants batter (Chris Speier?). The ball is shown over the batting helmet, which makes an interesting image over the reflected light. Judging from Lerch's record, I'm going to guess that this batter wasn't exactly quaking in his cleats, but it's a nice shot anyway.
Posted by Chris Stufflestreet at 8:30 AM