Wherever he went, his teams were often in contention. In fact, his final three years ended with trips to the World Series with three different teams: 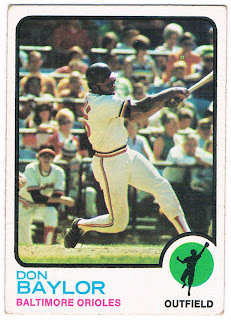 Card # 384 -- Don Baylor, Baltimore Orioles
Here's Don Baylor taking a cut at the plate. Since he's wearing a home uniform, I'm going to guess he's at the old Memorial Stadium in Baltimore rather than at Spring Training.

1972 was Baylor's first full season in the majors, and he was named as a member of the '72 Topps All-Star team. It even says so on the back of this card. However, Topps never bothered to put a trophy on the front.

He became known as a person who got plunked a lot. When he was playing, he was given the credit as teh player who had the highest all-time hit by pitches mark (despite the fact that two 19th century players had more; some statisticians like to point out that the game was "different" then and use that to discount most pre-1900 records except for Cy Young's wins). Craig Biggio eventually passed his mark in 2006. Baylor led his league in the category eight times.

We was also named the A.L. MVP in 1979 after leading the California Angels to the first postseason series in franchise history. He came to the Angels as a free agent in 1977 after spending '76 in Oakland (he was one of the players traded there for Reggie Jackson). He would remain with the Angels through 1982 and another ALCS before becoming a free agent again. This time, he landed with the New York Yankees, a team that was loaded with talent but didn't seem to know how to stay in contention once September rolled around. That wasn't Baylor's fault -- he would hit over .300 for the only time in his career that first year in pinstripes -- but those weren't great years to be a Yankees fan.
In 1986, he was traded to Boston and finally managed to get into a World Series. He went one groundball to Bill Buckner away from a ring, but got another chance the next year when Boston traded him to Minnesota during their late-season stretch. This time, he won his ring when the Twins won the Series in dramatic fashion over the Cardinals. In 1988, he went to the Oakland A's and once again went to the Series to finish out his career.

After retiring, Baylor became a hitting coach. In 1993, he was tagged to be the very first manager for the Colorado Rockies. When he took that team to the playoffs in 1995, it was the first time an expansion franchise had ever made the postseason in its third year. He held that position until 1998 and was the Cubs' manager from 2000 through 2002. He has continued to coach since his dismissal.
Posted by Chris Stufflestreet at 8:30 AM