Waiting For the Ruling...

This is a great game-action shot. Darrell Chaney has slid into third home, with the ball arriving at the same time and the tag applied. As the umpire prepares to make his call (and since his hand looks like it's making a fist, I'm willing to bet Chaney isn't going to like it), you can see the hopeful look that he's giving, hoping the umpire didn't see the tag applied: 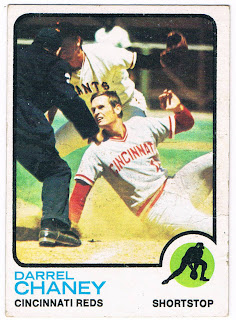 Card #507 -- Darrel Chaney, Cincinnati Reds
Chaney had come up with the Reds in 1969 and was mostly used as a backup for Dave Concepcion at short. He stayed around long enough to get a World Series ring in 1975, and then was traded to Atlanta. Since Concepcion wasn't going anywhere, Chaney was given a chance to become an everyday player with the Braves, and he responded by posting the best year of his career.

Unfortunately, he wasn't able to hold on to the job for long. Another one of the many prototypical good-glove/no-bat middle infielders of his era, he eventually lost out among competition from two younger players and was released in 1979. After his playing days, he was an announcer on TV and radio for the Braves.
Posted by Chris Stufflestreet at 8:30 AM