Here's a member of what was then called the Pittsburgh Lumber Company: 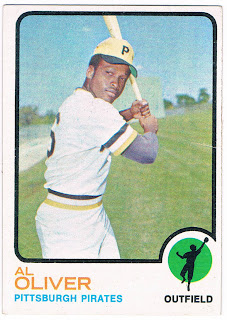 Card #225 -- Al Oliver, Pittsburgh Pirates
Though Oliver spent ten seasons with the Pirates, I remember him from watching Expos games on CKWS-TV out of Canada in 1983. He and Andre Dawson formed quite a potent team in the lineup. As a Pirate, he hit the final home run at Forbes Field and then scored the first run at Three Rivers Stadium. He was also a member of the 1971 World Series champs.

Al Oliver was a solid player, which has largely been forgotten by many. Over an 18-year career, he hit at a .303 clip and picked up 2,743 hits. He was also a seven-time All-Star selection and won three straight Silver Slugger awards. After ten years with the Pirates and four in Texas, he spent the last few years bumping around the majors: he was in Montreal from 1982-'83 and spent the next two seasons with four different teams. With the last team (Toronto in '85), he would get two game-winning hits during the playoffs but the Blue Jays lost the series.

As it turned out, that A.L. Championship series would be the final games of his career. Al Oliver didn't return in 1986, and he claimed it was because he was one of the players targeted by the owners in a collusion, although it's been disputed. However, he ended his career short of the 3,000 hit mark and may have missed out for consideration to Cooperstown. He'll still have a chance to get in through the Veteran's Committee at some point, because his numbers are strong. It remains to be seen if they're still seen that way in the future.
Posted by Chris Stufflestreet at 8:30 AM