This is an awesome example of 1970s style, even if the picture looks a little strange: 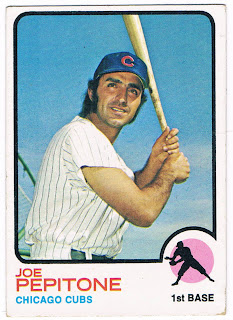 Card #580 -- Joe Pepitone, Chicago Cubs
Even though he spent three and a half seaons with the Cubs, Joe Pepitone looks strange to Yankee fans in a different set of pinstripes.


Pepitone was a member of the Yankees from 1962 through 1969. He was one of the last new members of the famed Dynasty years, and caused Moose Skowron to be traded to the Dodgers so he could take the first base job. However, Skowron won a Series ring in '63 against his old team, and Pepitone was the guy who made an error that let the winning run of the final game score. Jim Bouton mentioned him in Ball Four in a few funny stpries, saying he was vain and carried toupees to cover his balding head. The Yanks finally had enough of his antics and traded him to Houston after the 1969 season.

By the midway point of the 1973 season, Pepitone was no longer with the Cubs. Traded to Atlanta that May, he only played three games with the Braves before being released a month later. He then went over to Japan, where his name became slang. He would claim he was injured, but be found partying in nightclubs on days where he didn't have to bother going to work. Thus, his last name was slang for "goofing off."

Pepitone has had some very public problems in the years since he retired. He retuned to the Yankees as a hitting coach in 1982, only to be replaced by (then active player) Lou Piniella later that year. There were also some arrests for drunken driving and prison time for drug possession. He was given another chance by the Yankees after that, and still works for the team in a public relations capacity.
Posted by Chris Stufflestreet at 8:30 AM