Relegated to a "part-time" role because he wasn't effective against left-handed pitching, this player notched a few highlights but never really stood out: 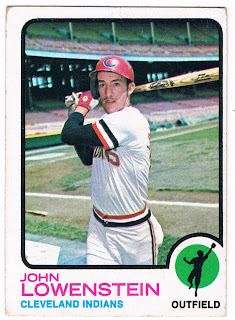 Card #327 -- John Lowenstein, Cleveland Indians
That is, with the Indians and later the Rangers. When Texas left John Lowenstein unprotected in 1978, it appeared his days as a weak-hitting utility man were over.

He was picked up from the waiver wire by the Baltimore Orioles before the 1979 season and became a very important cog in Earl Weaver's machine. While he was anemic against southpaws, he would totally destroy right-handers, and that made him perfect for Weaver's platoon system. In the process, Lowenstein helped the team win two pennants and one World Series title. He would remain with the team until early in the '85 season.

There are a few interesting facts about Lowenstein. First, he was picked up by the Blue Jays in the draft but never managed to play for the team. He was eventually traded back to Cleveland. He also holds a share for the all-time record for the number of positions played while hitting a home run (Rex Hudler is the other record holder, and I'm willing to bet most fans couldn't come up with either of those names if asked). He hit a home run at nine different positions, including DH and pinch hitter.

Finally, Lowenstein was hit in the neck in 1980 while on the basepath by a thrown ball and had to be carried off the field in a stretcher. As he reached the dugout, he suddenly sat up and pumped his fists for the fans. Lowenstein was well-known as a free spirit, whose quotes were sometimes memorable for their creativity: when asked about how a designated hitter keeps in shape, he quipped, "I flush the john between innings to keep my wrists strong."
Posted by Chris Stufflestreet at 8:30 AM