The back of this card states this was the biggest man in baseball. He certainly looks the part in this photo: 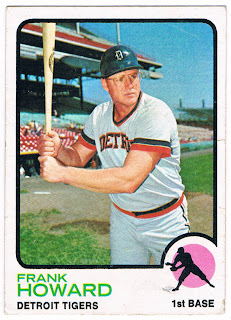 Card #560 -- Frank Howard, Detroit Tigers
Frank Howard was sold to the Tigers in August '72, so Topps obviously managed to get a late-season photo of him in his new uniform. Here he is in Milwaukee, waiting for his turn to crush the ball like it was a little bug.

He was almost the only player who ever hit a fair ball completely out of the old Yankee Stadium...but an umpire ruled the ball foul. Even Bobby Murcer -- the outfielder who chased that ball -- claimed it should have been ruled fair.

A two-sport star in college, Howard would be drafted by the NBA's Philadelphia Warriors, but instead took over for Carl Furillo in the Dodgers' outfield in Los Angeles. When the Dodgers swept the Yankees in the 1963 World Series, it was Howard who broke a scoreless tie in the final game with a shot to the Upper Deck in Dodger Stadium. However, he was a fourth outfielder by 1964 and dealt to the Washington Senators.

During his days on the roster there, Howard was also called "The Washington Monument" and "The Capital Punisher." The Senators were a perennial cellar-dwelling team, but Howard became a feared slugger there. By the late 1960s, his offensive numbers and batting eye had improved, and he was moved to first to ease the physical toll on his legs and knees. He moved to Texas with the franchise in '72 but his numbers dropped off. After finishing the season with Detroit, he remained there in '73 for his final major league season. In 1974 he went to Japan but hurt his back during his first at-bat.

After retiring as a player, Howard served as a coach and hitting instructor. He also did two stints as a manager, with San Diego in '81 and the New York Mets in '83. Both teams finished in last place, so Howard went back to coaching.
Posted by Chris Stufflestreet at 8:30 AM