"Killer" On the Rampage

Harmon Killebrew turned 37 in 1973. Though his body was showing signs that he was getting older, he was still a force at the plate. This picture shows him ready to take a big swing: 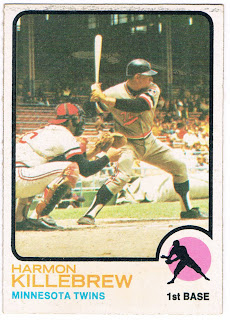 Card #170 -- Harmon Killebrew, Minnesota Twins
There aren't a lot of people in those stands.

Sadly, Killebrew's age was catching up with him by 1973. After being a powerful machine for the Seantors and Twins since 1959, he was beginning to get injured more often and his playing time was reduced. After the 1974 season, he was given an option: become a batting coach for the Twins, manage in the minors or accept a release. He took the last option and signed with the Royals.

When he retired in 1975, Killebrew placed fifth all-time among home run hitters. Despite that, it still took him four tries to get into the Hall of Fame. So much for the myth that 500 homers was ever an "automatic" way to get in.
Posted by Chris Stufflestreet at 8:30 AM