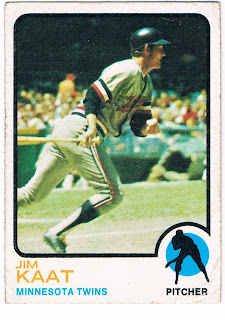 Jim Kaat is shown here running after making contact with the ball. By the time this card was making its rounds through its wax and cello covering, this photo would be a rare sight indeed. In 1973, the American League began using designated hitters in place of pitchers, which meant Kaat was going to have to wait until 1976 and a trade to Philadelphia before he needed to take his place at the plate again.


Jim Kaat wouldn't stay in Minnesota for the entire 1973 season. He was waived that summer and claimed by the Chicago White Sox. Finishing 4-1, he would win 20+ games the next two seasons. Kaat would continue pitching in the majors until 1983, after 25 seasons and 283 wins.
Posted by Chris Stufflestreet at 8:30 AM