This guy had already played his last major league game before this card was printed: 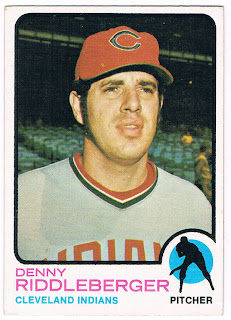 Card #157 -- Denny Riddleberger, Cleveland Indians
1972 was Denny Riddleberger's only year with the Cleveland Indians. He spent part of 1973 in the minors but retired during the season. Originally signed by the Pirates in 1967, he came up with the Senators late in 1970 and pitched with them in 1971 as well. After the team moved to Texas, they traded him to Cleveland before he even would have had time to unpack.

There really isn't a lot of information about Denny Riddleberger to be found Online, so I'll talk about this little fact: though he was a left-handed pitcher, he batted righty. That is an interesting distinction...did he get forced to do that, or was it simply because he learned to bat the same way his friends did? I don't know, I'm just asking.
Posted by Chris Stufflestreet at 8:30 AM