Not the Spanish Painter

There was an artist in Spain during the 1700s with the same name. However, this blog doesn't pretend to embrace high art, so we'll focus on this player instead: 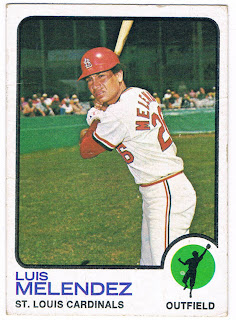 Card #47 -- Luis Melendez, St. Louis Cardinals
This Luis Melendez was nicknamed "Torito," the Spanish term for "baby bull." He came up to the Cardinals in 1970 and was solid enough with his glove to be regular for a couple of seasons. However, Bake McBride came up in 1974 and Willie Davis was brought to the team the next year. With Lou Brock and Reggie Smith already playing out there, it was getting crowded, and with more talent coming up through the farm system, it was clear that something needed to be done.

As a result, it was decided to convert Melendez into a shortstop. That proved disastrous, however, and Melendez moved back into the outfield. In 1976, he was traded to San Diego, where he served largely as a late-inning fill-in. He stayed with the Padres through 1977. The next year, he signed with the Blue Jays as a free agent, but never made the big league squad.

After his retirement as a player, Melendez returned home to Puerto Rico and eventually became a successful manager. He also managed in the minors in spurts since the late '80s, winning a South Atlantic League championship in 2004.
Posted by Chris Stufflestreet at 8:30 AM