This guy was a pitcher for Dartmouth before his major league career: 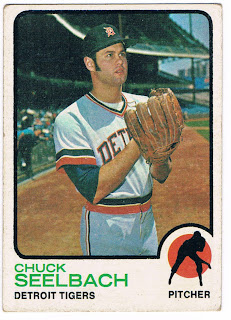 Card #51 -- Chuck Seelbach, Detroit Tigers
Chuck Seelbach pitched during four major league seasons (1971-'74), and all of them were spent with the Detroit Tigers. 1972 was really his only notable year, but what a season it was. As a reliever, he pitched the bulk of his major league innings that year and won 9 of his 10 games. More importantly, he was called in with the division title on the line against the Red Sox in the final game of the season. In dramatic fashion, he struck out Dwight Evans and Cecil Cooper, and the got Ben Ogilve to fly out. With that, the Tigers clinched the division.

Unfortunately, an arm injury limited him in '73 and ended his career in 1974. However, Seelbach did something that is more notable after hanging up his glove. He went back to his former high school in Ohio and became a history teacher, where his influence was arguably greater than it would have been if he'd stayed an athlete.
Posted by Chris Stufflestreet at 8:30 AM