This player bookended his career as a Cub but was better remembered for the other two teams he played with: 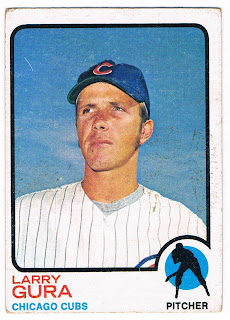 Card #501 -- Larry Gura, Chicago Cubs
Larry Gura first came up with Chicago in 1970, but was used sparingly through 1973. An occasional starter, he also worked the bullpen. He was traded to the Rangers, and then the Yankees before the 1974 season. Beginning in 1975, the Yankees used Gura as a member of the starting rotation.That said, they should have known what they were doing when they sent him to the Royals in 1976.

Gura's best years were in Kansas City. He particularly irked his former team, going 11-6 against them and seeing them four out of five years (1976-'78, '80) in the ALCS. In 1978-'81, he won every game against them where he had a decision, including two ALCS games. He was a member of the team that went to the '80 World Series; ironically, he was released by the team in 1985, the same year they finally won a championship.

1985 would be Gura's final year. He went back to Chicago, and the Cubs also released him before the year was over.
Posted by Chris Stufflestreet at 8:30 AM