Seen here posing in front of the old facade of Yankee Stadium, this catcher spent parts of 15 seasons in the major league with eight different clubs: 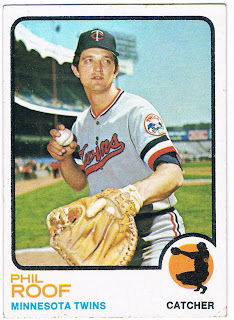 He spent six of those years with the Twins, which was the longest stint of his career. By the time he came to Minnesota as part of a trade for Paul Ratliff in 1971, he had settled into a position as a backup catcher, a role he would serve until the end of his playing days.

He came up in 1961 and again in '64 for one-game trials with the Braves in Milwaukee, then split 1965 between the Angels and Indians before being traded to the A's. Beginning in Kansas City and moving with the team to Oakland, he would become a regular catcher from 1966-'69. He would carry the role of regular backstop back to Milwaukee when he played for the Brewers in their first season in 1970.

He was with the Twins from 1971-'76 before heading to the White Sox and then finishing his career in Toronto during their inaugural season. Roof became a coach after his retirement and then a minor league manager until 2005.
Posted by Chris Stufflestreet at 8:30 AM