For many collectors, this player is best remembered for being the "other guy" on Nolan Ryan's rookie card: 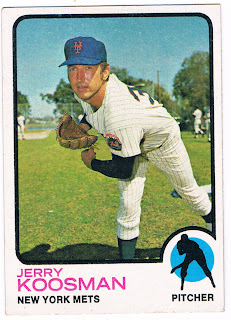 However, Jerry Koosman was the pitching star for the Mets in the "Miracle" 1969 World Series, rather than Tom Seaver (who lost Game 1) or Ryan (who only pitched a single game). In fact, when the Mets won the final game of that Series, it was Koosman who took the mound and helped get out of an early 3-0 deficit with his pitching.

The funny thing is that Koosman was close to being cut from the Mets as a minor league player in 1966. He was kept on the payroll to pay back a loan the team sent him when his car broke down on the way to spring training. Fortunately for him (and for the Mets), he improved before the funds were repaid. In his first full year with the parent club, he won 19 games, struck out 178 and had a 2.08 ERA. Those marks set the franchise record for rookie pitchers set by Seaver the year before.

Not only was Koosman helpful in 1969, he would star in the 1973 postseason, with both of his wins getting the team within a victory from the championships. In 1976 he enjoyed what may have been his finest season, with 21 wins and 200 strikeouts, but the Mets began falling off and trading away their star players. Koosman was sent to Minnesota after the '78 season. He responded by winning 20 games for the Twins in 1979.

He went to the White Sox in 1981 and helped the team to a postseason appearance in '83, before two final years in a Phillies uniform.

An odd coincidence: when Koosman was traded to the Twins, the "player to be named later" was Jesse Orosco, which meant that the two people on the mound as the Mets won their only two World Series titles were traded for each other. He also was remembered in the 1980s TV show Growing Pains. Where the main family was the Seavers, the next door neighbors were the Koosmans. For a show set on Long Island, it's safe to say the creators of the show had at least one Mets fan among them.
Posted by Chris Stufflestreet at 8:30 AM