The World Series is going on now, and this man is doing the color commentary for his 22nd Fall Classic, a string that stretches back to 1985: 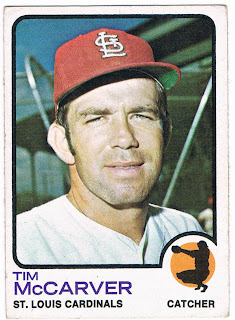 Card #269 -- Tim McCarver, St. Louis Cardinals
That said, Tim McCarver is one of those announcers that tends to grate on the nerves of some fans, much the same way as Howard Cosell did for Monday Night Football around 1973. Ironically, when he called his first World Series, McCarver was a last-minute replacement for Cosell. However, I'm not going to get too deep into his second career here, since he was still a player at this time.

McCarver was returning to the Cardinals in 1973 after splitting 1972 between the Phillies and Expos. Since the picture on this card doesn't look like it's been airbrushed, I'm guessing that it's from his first stint with the team (1969 or earlier). It was during that first period with the Cardinals that McCarver befriended pitcher Steve Carlton. Over a period that included one stint in St. Louis and two in Philadelphia, he became Carlton's favored catcher. During his late career, McCarver would return to the Phillies in 1975 and mostly caught when Carlton was pitching. It was joked that when the two players died, they would be buried 60 feet, 6 inches apart from each other.

McCarver's career as a broadcaster began in 1980 doing both the local Phillies broadcasts and serving as a backup for NBC's Game of the Week. Aside from a short return to the Phillies for the last month of the 1980s season (making him a four-decade player), he's worked in the booth ever since his retirement.
Posted by Chris Stufflestreet at 8:30 AM