One Small Error From Perfection

This card appeared in the final series of cards during the 1973 Topps set. By the time this card showed up in backs, this guy was no longer pitching for the Texas Rangers: 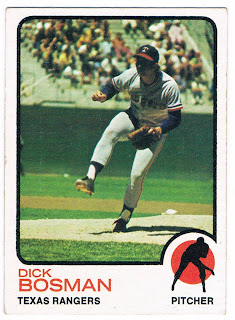 The picture shows him after a delivery, but he does look like he's about to kick something.

On May 10, 1973, Dick Bosman was traded to the Cleveland Indians after spending his entire career with the Washington Senators and moving with them to Texas. While with the Tribe in 1974, he pitched a no-hitter that would have been a perfect game if it weren't for his own throwing error in the fourth inning. That little factoid is ironic, because Bosman was also a control pitcher noted for his highly competitive nature. The man who was known to say "if you don't hustle when I'm pitching, I'll kick your ass" to teammates had only himself to blame for the one blemish of the game.

In 1975, he was traded to the A's, where he helped pitch the team to a postseason appearance. He would finish his career in the spring of '77 when the A's cut him before the season. He has served as a coach since then, currently working in the Tampa Bay Rays' organization.
Posted by Chris Stufflestreet at 8:30 AM