Not On My Watch

Today is Veterans' Day. As a veteran myself (U.S. Army, early 1990s), I would like to express my gratitude to all who have taken years out of their lives and helped keep this country safer. Today's card features a player who never went overseas with the military but will be remembered for an act he did that made many assume he had: 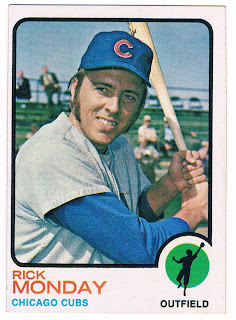 Card #44 -- Rick Monday, Chicago Cubs
On April 25, 1976, Rick Monday was in the outfield at Dodger Stadium and watched a man and his young son sneak on to the field. They had doused an American flag with lighter fluid and were set to burn it as a protest. Before they could get the match lit, Monday ran over and grabbed the flag away from them. That incident has come to overshadow a career that was itself very good.

Like many players of the era, Monday was placed in a reserve unit to satisfy his military obligation and keep him available to play baseball at the same time. Monday served with the U.S Marines one weekend a month and for a two-week training session every year until he had satisfied his obligation. Though critics complained that the system was unfair to those who didn't have alternatives available to them and were forced to go to Vietnam, the owners did it to prevent losing prized prospects for a year or two and losing time having them on the field.

Rick Monday was a star at Arizona State University, before becoming the very first player claimed in the major league draft in 1965. He was chosen by the Kansas City A's and came up to the club in '66. He was traded to the Chicago Cubs after the 1971 season for Ken Holtzman and enjoyed five productive seasons at Wrigley before being traded to the Dodgers before the '77 season in the deal that sent Bill Buckner to Chicago. It's been said that the '76 flag incident caused the Dodgers to be interested in Monday, but it needs to be pointed out that Dodgers skipper Tommy Lasorda had tried to secure his services during his days as a scout in the early 1960s.

After missing out on Oakland's three straight World Series, Monday arrived in Los Angeles in time for the team to win pennants in 1977 and '78 and was instrumental in getting the team to the World Series again in 1981. During the NLCS, Monday connected for a home run off Steve Rogers that gave the Dodgers the edge they needed to win the final game. Monday finally won his World Series ring that year when the Dodgers beat the Yankees in six games.

Monday remained with the Dodgers until retiring in 1984. The next year, he began a broadcast career that continues today. Starting on a cable TV station doing pregame shows, he went to the Padres in 1989 and joined the Dodgers' crew in 1993, replacing the void left when Don Drysdale died suddenly. He still does color commentary for the team on their radio broadcasts.
Posted by Chris Stufflestreet at 8:30 AM