A Decade Ahead of His Time...

Ten years before Michael Jackson popularized the one-glove look, this guy shows he's way ahead of the fashion (wearing a pair of wristbands, another '80s fashion accessory): 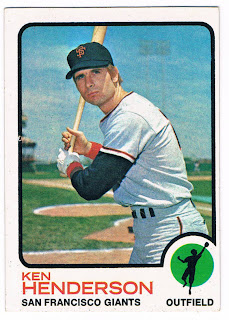 Card #101 -- Ken Henderson, San Francisco Giants
At least he isn't also wearing this pants pulled halfway down his hip or turned his cap around. However, he's also not shown in the uniform he actually wore during the 1973 season.

Ken Henderson was a switch-hitter who was also a great defensive outfielder. However, the Giants had a surplus of outfielders in the late 1960s, with Willie Mays, the Alou brothers, Bobby Bonds, and occasionally Willie McCovey, which limited his playing time. As the 1970s began, there were more outfielders waiting to play: Dave Kingman, Garry Maddox and Gary Mathews. Since some of the competing players were better at the plate, the Giants traded Henderson away after the 1972 season was over. Realizing his value, the team was smart enough to trade him into the other league, sending him to the White Sox along with Steve Stone for Tom Bradley.

He spent three seasons in Comiskey Park, even playing in all 162 games in 1974. However, he moved around frequently after that, playing for five different teams from 1976-'80 as age took its natural effect on his physical shape.
Posted by Chris Stufflestreet at 8:30 AM