With only the second baseman (who I'm assuming is Dick Green) in the background, here's another one of the many shots from the 1973 Topps set showing a pitcher's delivery: 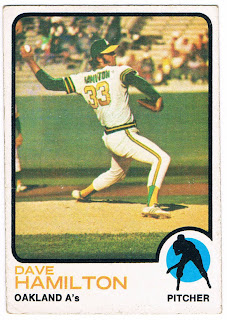 Card #214 -- Dave Hamilton, Oakland A's
I'm also noticing how sparse the crowd is in the background.

This is Dave Hamilton's rookie card, as he came up to the A's during the 1972 season. His first game was a win on against the Rangers, as he started the second game of a doubleheader. In fact, he won the first four games he pitched, but struggled soon afterward. His record was 6-5 in August when he was moved to the bullpen. He struggled in the postseason, blowing a save in the ALCS and getting tagged for four runs in only two-thirds of an inning during one of his two Series appearances.

The A's would win the World Series each of Hamilton's first three years. However, he didn't appear in the postseason in either 1973 or '74. He would also be used wherever he was needed, be it in the rotation or in the bullpen. When he was traded to the White Sox in '75, he would be placed into the bullpen on a full-time basis. He saved 25 games for the team in three seasons. In 1978, Hamilton was sent to the Cardinals and the results were disastrous. He was limited to a role mopping up, appearing in 13 games that were all eventually lost. Finally, his contract was sold to the Pirates, who were led by his former manager Chuck Tanner. He redeemed himself in Pittsburgh, but was soon relegated to mop-up duty again by the end of the year.

In 1979, Hamilton returned to the A's as a free agent, but the team was a much different club that in his first stint. He also went back to his former role of switching between the rotation and the bullpen. His 3-4 record that year doesn't seem so bad when you take account of the fact that the A's lost 108 games. In 1980, he split time between the A's and their affiliate in Ogden, but when he was demoted further in 1981, he retired.

After retiring from baseball, Hamilton spent some time as a high school coach. Since the teaching profession isn't regarded to be a well-paying one, he also worked with a construction company.
Posted by Chris Stufflestreet at 8:30 AM