Changing of the Guard...

This picture represents the end of a very dark era for Yankee fans...or the beginning of another for non-Yankee fans: 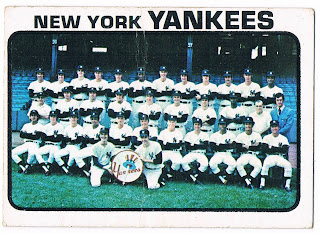 Card #556 -- New York Yankees Team Card
After more than 40 years of near-constant success, the Yankees failed to win any pennants after 1964. During those years of near-constant success, they were led by owners who were willing to do what they needed to get the best possible team on the field. Jacob Ruppert owned the club from 1915 until his passing in 1939 and was known for being an aggressive wheeler and dealer. In 1945, Dan Topping and Del Webb bought the team from Ruppert's estate and ushered in yet another era that saw the team win a pennant nearly every year. During the 20 seasons they owned the team, they won 15 pennants and 10 World Series.

In 1964, they sold the team to CBS. The large company treated the team as just another entity in its conglomeration, and the team suffered. As their 1950s stars aged and retired, CBS didn't pursue new talent the same way that the previous ownership did; when the draft began, they weren't assured of getting the best players anymore. By 1966, the Yankees finished dead last in the league for the first time since 1912.

In 1973, a shipping magnate from Tampa purchased the team and went about building another Yankee dynasty. His name was George Steinbrenner, and he would definitely have his hand in the day-to-day operations of the club.

Pictured here is the last Yankees team of the CBS era. Many of these players would soon be traded away or retired. The manager, Ralph Houk -- who went back to the Topping/Webb years -- would soon leave the position. It would be the beginning of a rapidly revolving managerial door that spun around until 1995. Thurman Munson and Roy White were among the few players who remained and helped the team win three straight pennants and the 1977 and '78 World Series.

I do wish to point out the gentleman in the second row, second to the right. That is Pete Sheehy, who served as the team's clubhouse manager from 1927 until his death in 1985. His time with the club spanned from Ruth and Gehrig through Mattingly and Winfield. An awful lot of baseball history went on during his watch. Supposedly, when Lou Gehrig realized it was time to sit out, he tossed his glove to Sheehy before telling his manager. Sheehy also suggested that Mickey Mantle take uniform #7 after his first stint in New York as #6 didn't turn out well. It's neat that he's able to show up in this set.
Posted by Chris Stufflestreet at 8:30 AM