Both of the players in this picture would later play for the New York Yankees: 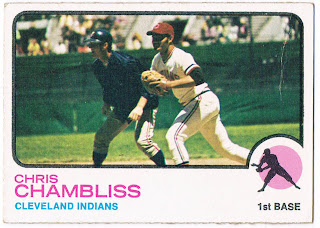 Card #11 -- Chris Chambliss, Cleveland Indians
That's Jim Kaat being held at first base, back when American League pitchers were still allowed to take their turn at bat. The second-ever post on this blog shows Kaat taking a turn at the plate, and I wonder if that picture was taken at the same game (and before he put on his warm-up jacket). But I digress...this post isn't about Jim Kaat.

Chris Chambliss came up the the Tribe in 1971 and was named Rookie of the Year for his efforts. In 1974 he became one of the several former Indians (Graig Nettles, Oscar Gamble, Dick Tidrow, Fred Stanley) who went to the Yankees after the team's former executive Gabe Paul was made GM there. Paul was trying to build a team that would bring the Yankees back to glory, and Chambliss did a big part to help win their first pennant in 12 years by crushing a home run to win the 1976 ALCS.

After being a big part of the team's dynasty that won three straight pennants and the 1977 and '78 World Series, he was traded to Toronto after the '79 season but never played for them as he was sent to the Braves a few days later. He remained in Atlanta through 1986 and was the everyday first baseman through 1984. In 1988, he served as a hitting coach for the Yankees and was re-activated for one game, where he struck out in his only at-bat.

He continued with coaching and managing in the minors. Among the stops was another stint with the Yankees from 1996-2000, where he served as the hitting coach under Joe Torre, who managed him in Atlanta. He won four more Series rings in that time. In 2010, he was hired as a coach for the Seattle Mariners.

I don't usually show the backs of the cards on this blog, but I was interested in this one for a very personal reason: 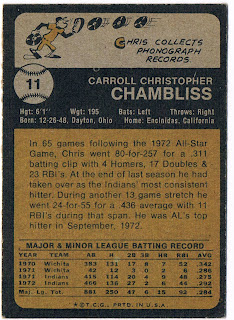 I like that cartoon...because it describes me as well. Or at least it did, until a fire that I don't like to talk about. Fortunately, I still have several hundred CDs and a very large collection of digital files of songs that were hits from 1908-present. And they are part of the same passion I have for cards; in addition to these two blogs, I also write two blogs that are music-related: 70s Music Mayhem and 80s Music Mayhem. If you happen to like the music of those two decades, check them out.
Posted by Chris Stufflestreet at 8:30 AM