Here's a guy who was well-known for throwing hissy fits in the dugout after getting called out: 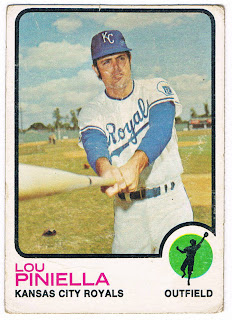 Card #140 -- Lou Piniella, Kansas City Royals
At the time, we should have realized that the top temper tantrum-thrower in baseball was practicing for the time he could direct his anger at the umpires as a manager.

Collectors remember Lou Piniella for having three multi-player rookie cards: in 1964, with the Senators (he actually played with Baltimore for four games that year), in 1968 with the Indians and in 1969 with the Pilots (who traded him to the Royals in the spring). In 1969, Piniella was still carrying "rookie" status despite playing in 1964 and 1968 and was an immediate hit in Kansas City, where he went 4-for-5 the first day they played and ended up winning the Rookie of the Year award. His 1970 Topps card had an All-Star Rookie trophy, which seemed to be odd for collectors who found him on all those "rookie" cards of the past.

Piniella remained in Kansas City through 1973 as one of the team's biggest early stars. He was named to the All-Star team in 1972 and though he wasn't speedy or powerful and didn't draw walks, he was able to hit for a .300 average. After the '73 season, he was traded to the Yankees, where he would become an unmistakeable part of the "Bronx Zoo" during his 11 years as a player there. As a fixture in the outfield or at DH, he was able to contribute to the team's 1976-'81 "dynasty" that saw five division titles, four pennants and two World Series titles.

By the early 1980s, Piniella's playing time was limited as his skills declined, but he was kept on the Yankees as a part-timer who also helped as a veteran presence. In short, he was transitioning to become a coach, and that became permanent once he retired in 1984. Beginning as a hitting coach, Piniella was inserted into the revolving door of managers that George Steinbrenner used, twice being named the team's skipper between 1986 and '88. He also served as the Yankees' GM in the interim.

When he moved over to the Reds in 1990, Piniella led his team to the World Series title. He stayed at the helm there through 1992, and then managed the Mariners from 1993-'02, the Devil Rays from 2003 to '05 and the Cubs from 2006-'10. He was generally successful; the Mariners years were often the most productive in the franchise's history (even tying the all-time record for most wins in 2001). There were six more playoff trips, but no more appearances in the World Series.
Posted by Chris Stufflestreet at 8:30 AM