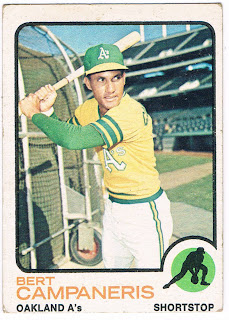 Card #295 -- Bert Campaneris, Oakland A's
While this card shows Bert Campaneris posing with a bat in front of a batting cage, he shows up in the action for several other cards in the 1973 Topps set. Though he only played 13 seasons with the A's in both Kansas City and Oakland, he still holds the team record for games played, hits, putouts, assists and for double plays at shortstop. He retired with the most stolen bases, triples and at bats but those marks were surpassed by Rickey Henderson.

Campaneris had his share of career highlights. During his first game in 1964, he slammed two home runs, including one on the first pitch he ever saw. He was also the first player to ever take all nine positions on the field in a single game. That was in 1965, when owner Charlie Finley used him as part of a promotion. He has a decent hitter and fast baserunner, but he was most valuable to the team for his defensive abilities. He was a six-time All-Star and played a pivotal role in helping the A's win three straight World Series.

After the 1976 season, the A's started jettisoning its dynasty-era players and Campaneris went to the Rangers as a free agent. Age slowed him down and limited his playing time in 1978, and he was traded to the Angels the next year. After working in a platoon system and eventually becoming a reserve third baseman, he left the team after 1981 to play in the Mexican League. He wasn't done with the majors, though; in 1983 he played with the Yankees as a reserve player.

After retiring, Campaneris coached in Japan for a couple of years and played in the Senior League in the late 1980s.
Posted by Chris Stufflestreet at 8:30 AM