For those who didn't recognize the words in the title...they were the opening words to the TV show Chico and the Man, even though that didn't actually debut until 1974. "Chico" was the nickname of this guy: 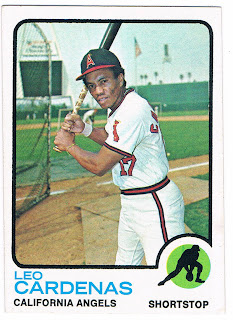 Card #522 -- Leo Cardenas, California Angels
Leo "Chico" Cardenas was an infielder who spent sixteen seasons in the major leagues. He came up in 1960 with the Cincinnati Reds and remained with the team through 1968. He appeared in the '61 World Series against the Yankees and moved into the team's regular shortstop role by 1962. When Pete Rose came up in 1963, Cardenas was his double play partner. He would be traded to Minnesota and played for the Twins during the first two ALCS series. After the '71 season, he was traded to the Angels.

1972 was Cardenas's final year as an everyday player. His skills were beginning to wane due to his age, so he lasted that one season in California. By the time this card was included in wax packs, he was playing for the Cleveland Indians. 1973 was the first season where Cardenas played any position besides shortstop (we went to third in 10 games), and he would split time between the left side of the infield -- with a couple of DH appearances for the rest of his career. His final two seasons were spent in Texas, where he played for his ex-Twins skipper Billy Martin.

Cardenas is a native of Cuba, which provides the backdrop for an interesting story about him. While he was playing in Havana during the 1950s, Cardenas was on the field when several supporters of Fidel Castro became so excited they began firing their rifles in the air. Some of the bullets arced back onto the field and several players (including Cardenas) were injured by the gunfire. As the political climate in the country worsened, Havana's team was forced to play the rest of their schedule in the U.S.
Posted by Chris Stufflestreet at 8:30 AM