"When I was a kid, I wanted play baseball and join the circus. With the Yankees, I've been able to do both." 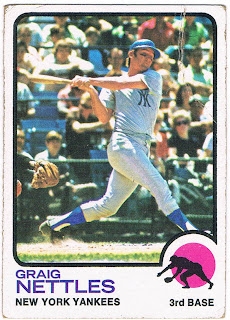 Card #498 -- Graig Nettles, New York Yankees
Graig Nettles was a big cog in the Yankees' late 1970s dynasty. 1973 was his first season with the club, which means he arrived just in time for the beginning of the Steinbrenner Era. Nettles got a great deal of mileage from his time with the Yankees, not only for his on-field performance at the "keystone" position but for his off-kilter quotes in the locker room like the one quoted above.

That said, there's a major problem with the photo above. It's an obvious airbrush job, one that is badly done. The helmet and stirrup socks may match, but they're not the same blue color the Yanks use on their uniforms. But more than that, the interlocking "NY" logo only appears on the team's white, pinstriped home uniforms, not the road grays. Given the fact that Topps was based in the same city as the Yankees were, one would think that little mistake would have been caught.

Though not Hall of Fame-caliber, Nettles was one of the best third basemen of his era. With Cleveland, he set the all-time major league single-season record for assists at the position in 1971. He still holds second place all-time in that stat (behind Brooks Robinson). Though a right-handed thrower, he batted from the left side and was a long-ball threat with Yankee Stadium's short right field fence. He led the American league in home runs in 1976...with 32, one of the lowest league-leading totals of the "live ball" era. Most importantly, he was a big help to the teams that won four pennants and two World Series between 1976 and '81. Though he was known for colorful comments in the locker room -- many of which were sharply-worded barbs at his team's owner -- when he and Peter Golenbock wrote a book titles Balls that chronicled the failed '83 season, he was quickly traded away.

Despite his banishment to San Diego, he responded by helping the Padres get to the World Series for the first time ever. He spent three years in the city of his boyhood before finishing up with a season in Atlanta and one more in Montreal. When he finally retired, he was 43 years old. Despite the increased number of long balls since his retirement, Nettles still owns the American League record for most homers by a third baseman.
Posted by Chris Stufflestreet at 8:30 AM